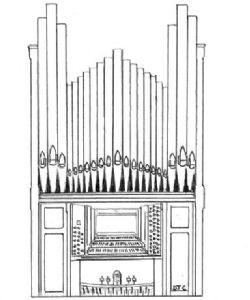 Music plays an important part in our worship which includes hymns, psalms to Anglican chants and anthems each Sunday and we are fortunate enough to have an excellent organ to accompany our singing.

There is no evidence of an organ in the church before about 1870 when a single manual instrument was installed by Messrs Bryceson Bros. This organ was later moved to Stowey Church near Bristol in 1934 and is still in use there today.

In 1932 Percy Daniel & Co built a new two manual organ with an enhanced specification. Later a 4ft flute and a pedal 8ft flute were added. Then in the 1970s more sparkle and power was added to the instrument with the addition of a trumpet rank and the `Nave' organ which is situated behind the South Aisle Screen and so is helpful for supporting congregational singing.

In 1996 The organ was thoroughly overhauled by B C Shepherd & Son. The mechanical action was rebound and new chests were made for several stops by Nick Hillman. Every pipe was cleaned and checked for correct speech. Solid state switching is now used to control the valves on the pipes.

During the cleaning it was noticed that one pipe had beautiful copper-plate engraving on it: Pitch Pipe Lady Glenorchy’s. Lady Glenorchy founded a chapel in Edinburgh which was later demolished to make way for the North British Railway and Waverly Station. In the replacement building Foster & Andrews built an organ in 1896. In the 1960s the congregation moved to a simple brick building with an electronic organ. We bought the Great Fifteenth in 1970 for £14 from an organ builder in Scotland who was demolishing an instrument. John and Eric Shepherd are very good at blending different pipework into an harmonious unity.

Further enlargement during 2002 included the addition of a third manual to play the Nave Organ and two more stops on the Great. The organ now has the following: Great 7 stops, Swell 4 stops with three borrowed from the Nave, Nave 16 stops, Pedal 8 stops, Reeds 3 stops playable on the Great & Swell and 10 couplers making 51 drawstops on the console.

Our choir of around twenty four voices has given several concerts and has sings ‘cathedral type’ evensong once a month, as well as special choral services such as the Nine Lessons and Carols.

Since 1989 28 choristers have passed the Bishop’s Chorister Exam. Two achieved the prestigious RSCM St Cecilia award and in 1990 Penny Neill, who has now graduated in music from Goldsmith’s College, reached the final of the national Choirgirl of the Year competition.

If you would like to know more about music in general at Cookham Dean, the Choir, the Celebrity Organ recitals or technical aspects of our organ, email our Organist and Choir Master.